Skip to content
Adopting a ‘One Boat’ MindsetAnita Bhasin 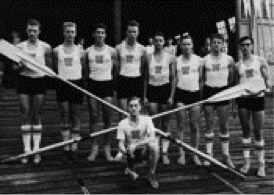 To say the odds were against them was putting it optimistically. The year was 1936. A ragtag collection of sons from logging, shipyard, and farming families had made the journey from the University of Washington to the Berlin Olympics to compete in the Men’s eight crew team competition. No one expected them to last or even show well against the British team, which won the double-scull race, and certainly not against the German team, which had just won five straight races. The final race was the last event in the competition. In a steady rain, before 100,000 spectators, the boys from Washington set off. In minutes, not only had they beaten the British, they went on to stun the world by defeating the favored German team.

What was their secret? Balancing the boat and equally valuing every seat, each person doing what’s best for the team while carrying their own load, sharing leadership and staying in sync. In short, they had a “one boat” mindset.

Thinking more about how the 1936 U.S. team rowing won the gold, I realized that there is much to learn about organizational change and transformation from the sport. The reason is that, unlike in other sports, rowing relies on concerted, coordinated effort by people pulling together in the same direction. Rather than star quarterbacks, top scorers, or talented forwards that secure the victory, the small and large actions of each person is what makes or break the team.

We need a similar shift in today’s organizations:

Helping organizations make these important shifts is central to my work. To do so, I partner with the creators of The Rowers’ Code, who use the metaphor of rowing for the development of teams to experience new ways of working together. Finding new ways of working together is critical, as these experiences help shift the beliefs and values underlying your organization, making possible the task of cultural transformation.

Here are three tips to help your team, group, or organization make this critical cultural shift, achieve a one-boat mindset, and attain your own “Gold”:

1. Always do what’s best for the team. Being on a winning team means putting the interests of your team in front of your own. Rowing as “one boat” instead of everyone rowing in his or her own direction requires us to commit to the team and its direction.

2. Help employees gain trust in each other. Cultures of great employee engagement are ones in which team members trust and support one another in achieving a common goal. In one unforgettable scene in The Boys in the Boat (Brown, 2014), the story of the 1936 U.S. rowing team, Shorty Hunt says to his teammate, “I got your back, Joe.” That kind of reassurance, especially from peers, is extremely strong, and adds core strength to the team. It was particularly powerful for Joe, who had trouble trusting others. Ultimately, he realized he would never achieve his full potential unless he trusted the other men in the skull. Your people need to have the same trust in each other. An “every man for himself” culture won’t enable your organization to perform better than the competition.

3. Support employee camaraderie and teamwork. When a boat hits its swing, it goes faster at a lower stroke rate than a less united boat will at a higher one. Each collective stroke results in more glide between strokes. We have all, hopefully, worked in groups where we have this sense of being united and achieving more with less. Achieving this state of collective flow requires common direction, trust, but also faith in each other’s abilities. In such an environment emerges mutual respect and joy.

How do you achieve a one boat mindset in your organization? I’d love to hear your ideas, so please email me at anita@sagewaysconsulting.com.

This website uses cookies
We use cookies to personalize content and ads, to provide social media features and to analyse our traffic. We also share information about your use of our site with our social media, advertising and analytics partners who may combine it with other information that you’ve provided to them or that they’ve collected from your use of their services. You consent to our cookies if you continue to use our website.