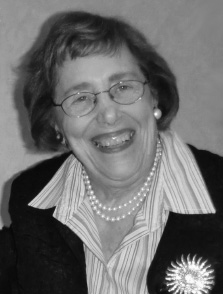 Edie was a pioneer and explorer in the fields of human relations training, organization development and professional coaching. She left behind a legacy through those of us educated, coached and mentored. We will long remember and appreciate the wisdom this fearless sage passed on.

To experience Edie Seashore’s work and teachings, as we did in her later years, was to sit in deep awe and gratitude. Edie probably didn’t top sixty inches, but she held the space in a room utterly. Then as a group worked through whatever they needed to work through, as tensions mounted, as lips thinned, she would let things unfold. Then, just that second when things were about to spin out of control, when half the room looked ready to fight and the other half burst into tears, she’d step in: “I think we’re all noticing something here.” And she’d drop the knowledge. She’d help people see themselves as others would. She’d put her finger directly on it. Straight, no sugar; yet never harsh. And like that, aaaaah, release. Everyone nodding. Enlightened. Empowered. Inspired to make the same kind of impact on human beings and the world which we choose to create! Edie: connoisseur of disturbance in pearls and a brooch. Queen of the breakthrough moment. Grandmaster of those awkward stretches of conflict and unease. She was all of that, and so much more. We are honored to have known and learned from her, standing as we are on her giant’s shoulders.

By Pam Nilzon|December 2nd, 2015|Comments Off on In Memoriam: Edie Seahore

Want more wisdom? We send a newsletter every few months.
Give it a try.

This website uses cookies
We use cookies to personalize content and ads, to provide social media features and to analyse our traffic. We also share information about your use of our site with our social media, advertising and analytics partners who may combine it with other information that you’ve provided to them or that they’ve collected from your use of their services. You consent to our cookies if you continue to use our website.